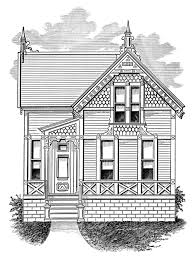 By Ellis Rawnsley
For over fifty years it was the fashion to sniff at architectural gingerbread as the epitome of Victorian bad taste, but now it is considered an American folk art, treasured by owners of the lacey, old houses that display it.

“Gingerbread” is the name given to the wood cutouts with which the Victorians decorated eaves and porches, porch rails and cornices. For the most part, it adorned houses described as Gothic, Tudor Gothic, or Gothic Revival, and their offshoots, nicknamed with some derision as Carpenters’ Gothic or Steamboat Gothic. But even other Victorian styles that tended to classical forms had gingerbread touches, although decoration in those styles tended to be built-in instead of added on.

In the follow-the-leader fashion, even modest houses of that era had some gingerbread, though it might be nothing more than a curlicue in the front porch bracketing or a design under the eaves.

Gingerbread had its beginnings in the 1830s, inspired by the newly built, ornate House of Commons in London.

In America, it came into fashion after the War Between the States, and lasted until early into this century, when simpler tastes began to prevail.

To the Victorians, a surface was something to be decorated or draped, inside or out. Even proper young ladies did fretwork, turning out intricate decorations with their coping saws.

In time, though, gingerbread came to be looked on as something of a horror, and critics couldn’t say enough against it. Houses were condemned as “overloaded with meretricious ornament,” the builders were accused of “a lust for ornament,” and the style, it was said, had “nothing but novelty to commend it.”

But to a present-day critic “it is apparent that the reason for sawn-wood ornament was simply a desire to create for its own sake” by simple and unsophisticated souls. Thus their work “is a folk art which should take its place among other respected, native American expression.”

The critics knew more about art—or thought they did—than about carpentry. To most early critics, gingerbread was the product of a machine-age mentality. The band saw was invented soon after the War Between the States and the Victorians ran wild with it. Band saws and other woodworking machines required power to drive them, and the early power sources were ponderous engines that ran on steam or illuminating gas.

Portable power tools were still far in the future. As late as 1910, Sears catalogs offered nothing more mechanical than treadle-operated saws, which must have been more expensive than they were worth to the average carpenter builder. He did most of his work with nothing more than a couple of saws and a brace and bit—much gingerbread is little more than combinations of slots and holes.

One plausible theory states that much of the gingerbread that was turned out came from a frugal desire to do something with leftover pieces of wood.

Of course, there were mills where decorative pieces of standard patterns could be bought. Catalogs of the time, though, suggest that much of the mills’ output was heavy porch and cornice brackets that a builder might hesitate to make for himself, or spindles and other round pieces that he was probably in no position to make. Back then, the lathe was not a common tool in woodworking shops.

But in spite of the contention by some that gingerbread was all factory-made, it is rare to find two houses decorated alike, even those obviously built by the same builder to the same pattern at the same time. It is possible to detect some fairly standard elements but the evidence shows that they were combined in different ways to suit the whim of the builder or his client.

For the most part, gingerbread was found in suburban and country houses. City styles in houses and commercial buildings tended to the more classical Victorian designs derived from Greek and Italian models. Some regional differences existed, too, as well as stylistic variations.

Eastern resort areas of New York and New Jersey, such as Saratoga and Cape May, tended toward elaborate gingerbread ornamentation on styles from adaptations of Gothic Revival to the eclectic, or mixed-up mess. Builders were not above mingling one style with another. At the other extreme, San Francisco Victorian consists almost wholly of what is called the Queen Anne style, although that queen had nothing to do with it. In fact, the style is attributed to an English architect who, in adapting a medieval style, mistakenly put it in the wrong century.

Though east and west coasts tended to extremes, some of everything developed in well-to-do neighborhoods in the heartland with a little more conservatism. The highly decorated porch apron (between the porch floor and the ground), for example, is more common in New England than elsewhere.

The history of gingerbread is not without its humor. One Victorian style is known as “Eastlake,” after the English critic, Charles Eastlake. His book, Hints on Household Taste, was intended to discourage ornament run wild. Instead, an Eastlake style developed in America, known for chamfered corners, cutouts imposed on flatwork, ironwork cresting on roof ridges – all that Eastlake deplored and which he sought (vainly) to disown.

Early in the 1900s, gingerbread houses provoked laughter or criticism, but now the cutouts and curlicues are returning to favor. It may be that architectural gingerbread is gaining respect as American folk art because it preserves a bit of our history and—more importantly—satisfies our nostalgia for more innocent times.

Ellis Rawnsley was born in Bradford, Yorkshire, England, in 1906 and emigrated to the United States at the age of thirteen years. While not yet out of high school, he was hired by the Associated Press, becoming the youngest reporter in its history. After graduation, he began a career in newspaper work which spanned fifty years: first with the Associated Press, then with the Cincinnati Times-Star; and last with the Cincinnati Enquirer where he served as Garden Editor until his retirement. In 1960 he was awarded the coveted ASTA Award from the American Seed Trade Association as “the outstanding garden writer in the United States.”

A resident of Terrace Park, Ohio for sixty-three years, he compiled The Centennial History of St. Thomas Church and was the author of A Place Called Terrace Park. His first miniature book, Roses, was published in 1983 by Mosaic Press of Cincinnati.

Victorian Gingerbread was completed before his death in 2001 and is published in his honor and memory by his daughter, Virginia R. Fenton.