My, How We've Grown 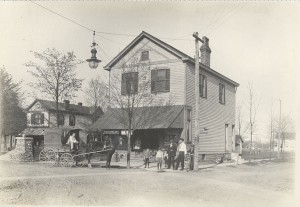 ####post by Jen Buchholz, reprinted with permission from the August 2015 edition of "A Walk in the Park" Magazine (N2Publishing.com)

As the Terrace Park Historical Society has just completed the task of creating a new Village Directory, we can't think of a better time to reflect on how our community has grown.

In 1900, Terrace Park was home to a mere 290 residents. There are now more students just within the walls at Terrace Park Elementary!

The next decade saw a boom in Terrace Park residents as the neighborhood grew to 448 residents. The entire country saw more than 20% growth, according to the 1910 census, a population of more than 92 million people. William Howard Taft was president. Wilbur and Orville Wright were flying around Huffman Prairie Flying Field, nearby in Dayton, OH. The country would enter World War I later in this decade, possibly the reason for a small dip in Terrace Park residents by 1920.

The 1930s welcomed a record 713 residents in Terrace Park. As the country faced the Great Depression and the Dust Bowl, Franklin Delano Roosevelt became president and announced a New Deal.

Our town grew to 858 residents according to the census of 1940, while the country was home to over 132 million residents, and the world continued to face World War II. Minimum wage was 43-cents per hour and only 55% of homes had indoor plumbing.

In the next census, in 1950, Terrace Park was home to over one thousand residents, a number that nearly doubled to 2023 by 1960, while the country faced McCarthyism and the Korean War. This decade saw the development of the polio vaccine, the popularity of Elvis Presley and the opening of McDonald’s and Disneyland.

In the 1970s, the decade of Watergate, Terrace Park growth expanded to 2266 residents, although it was still among the five smallest communities in Hamilton County. In contrast, Mariemont had 4,450 residents and Indian Hill had 5,651 at this time.

The new directory is an informal census of our own. We reached out to 840 households and businesses with an initial bulk mailing. We followed up by sending 89 emails, mailing 113 postcards to new residents unfamiliar with the TP Directory, and knocking on around 150 doors.

According to our count, TP is now home to 737 families. We arrived at this number as this was the number of households that responded to our communications. The remaining 103 addresses represented either businesses or houses that were empty, rentals, for sale, or uninterested in the directory.