Evening at the Theater 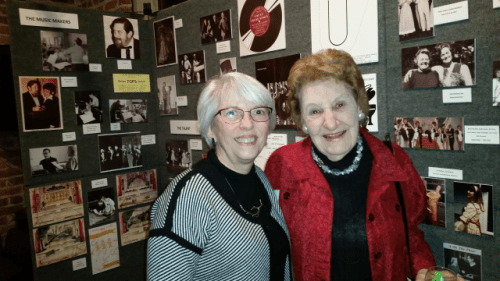 Braving snow and cold, members of the Terrace Park Historical Society turned out for an evening at the Walton Creek Theater, to commemorate the Terrace Park Players and to take in a performance of the play "Mornings at Seven" by the Mariemont Players.

We were pleased that one of the original creative forces from Terrace Park's theater group was able to be with us - Pat Matchette composed and directed many of the musical numbers from the Terrace Park Players repertoire. The display in the background chronicles the story of the Players and the many creative personalities who made the group a success.

From the late 1950’s through the 1980’s, Terrace Park had a very active community theater which in its heyday produced two plays, a musical, a musical revue and a pops concert nearly every year. Using primarily Terrace Park talent, this group staged productions at the school, the Community House and the Village Green. There was even an original bicentennial extravaganza with a cast and crew of nearly 250 called 200, By George which was performed outdoors three July nights at the Log Cabin and was seen by about 1400 people sitting in bleachers.
Also on display were posters designed by a youthful Mark Eberhard, set designs worthy of the Aronoff Center, photos of some amazing costumes, and programs listing so many of our talented neighbors.