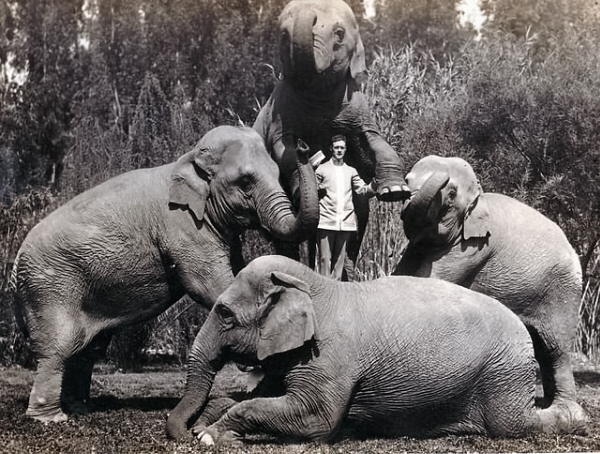 (by Jen Buchholz, reprinted from "A Walk in the Park" Magazine)

No matter how long you live in Terrace Park, I don't think you ever get tired about hearing stories about the Robinson Circus, one of the most popular traveling shows in the late 1800s that spent its winters in our neighborhood. And of course, one of the most remembered characters from the Robinson Circus is Tillie the Elephant. Elephants, however, were not just popular in Terrace Park in this time period and were an important part of cultural fabric throughout the land, an icon of our country's characteristics of strength, fearlessness and loyalty.

Although John Robinson's circus featured many performing animals, the elephants were a big favorite--and elephants remained a part of the neighborhood long after the Robinson circus had closed. The sunken area between Wooster Pike, Elm and Robinwood is still referenced by some as "the elephant hole," where the elephants once put on an impromptu show that was so popular with residents that John Robinson built a practice ring there that remained a well-attended gathering spot. The most famous elephant act was called "Military Elephants," where the elephants would march in military formation, fire cannons and even tend to other elephant soldiers who had been wounded in battle.

Stories abound about Tillie's leadership within the circus. She once broke ranks to stop a circus wagon from falling over. When an elephant killed its trainer, legend has it that Tillie pursued the renegade elephant and sat on him until he could be restrained. Along with fellow circus elephants Tony, Pit and Clara, Tillie made her home in Terrace Park after retiring from circus life.

Lore says that Tillie was the oldest Asian Elephant. Even today, the average lifespan of an Asian Elephant in captivity is only about 48 years. Tillie's funeral on January 17, 1932, noting her age at 120 years old. Now, many circus historians believe that she was actually around 65 years old. Her funeral was a sad day in our neighborhood and a well-attended event. You can explore the Terrace Park Historical Society website for a recount of the ceremony from an eyewitness, Frances Verkamp, a third grader at the time. See Story Here

Elephants, however, had a popularity that extended well beyond the Terrace Park boundaries. Asian elephants were first imported to the United States in 1796 and by the 1880s, the first Asian elephants were born in this country. The second elephant brought to the US in 1804 was named Old Bet. She was an African elephant from Calcutta who traveled to New York and then onto Boston, where she was purchased by a farmer named Hachaliah Bailey, who was eventually to become the other half of Barnum & Bailey. Old Bet was such an attraction at Bailey's farm that he started a menagerie that included a trained dog, a few pigs, and Old Bet as the main attraction. It became so popular that he took his menagerie on the road, where Old Bet met an untimely end in 1816, when she was shot by a farmer who thought it was sinful for poor people to pay to see an elephant. (Another story says that she was shot by a boy who wanted to see if elephant hide was bullet proof.) Old Bet, however, is known as the mother of American carnival business.

Likely the most famous elephant in the world was Jumbo, an elephant captured shortly after birth, in the 1860s, brought to London and then finally to the U.S. where he was part of Barnum & Bailey's Greatest Show on Earth in New York. Jumbo became one of the first commercialized animal celebrities. He was called the largest elephant ever seen by mortal man--a likely hyperbole, but it gained him great attention. Due to his great size and vast popularity, "jumbo" soon became a catchphrase for anything supersized, like the biggest steam train in America, named the Jumbo Whistle. In 1884, the architects of the Brooklyn Bridge employed Jumbo, along with twenty other elephants and seventeen camels to walk across the bridge, showing the new bridge was safe enough to cross. Jumbo was hit by a freight train in 1885 and died. P.T. Barnum said that Jumbo actually pushed him out of the way of the oncoming train, saving his life, and showing the elephant's heroic and fearless personality.

So deep was the country's love for elephants that in 1881 an architect named James V. Laffley was granted a patent to build elephant-shaped buildings. His first one was built in Margate, New Jersey, a few miles south of Atlantic City and was used as a publicity stunt to sell parcels of land at the New Jersey shore. The elephant, named Lucy, is 65 feet high, 60 feet long and 18 feet wide. Customers were able to climb up through Lucy and could view parcels of land from her howdah. Lucy has had many lives, as a bar and restaurant, a hotel, an office and a private home. She fell into disrepair in the 1960s and was preserved thanks to a neighborhood civic association. Lucy, who just celebrated her 134th birthday, was made a National Historic Landmark in 1976. She is exalted as the oldest elephant in the world. Lucy is beloved by the community and is still open for daily tours.

There was a dark side to human interaction with elephants during this time. According to New York Post post by Susan Calahan, elephants in the post-Jumbo era were granted American citizenship, giving them access to every right as a human except owning property. Even though most elephants were wild animals that had been trained, it was believed that they could think for themselves and were responsible for all of their actions, including what were called "moral transgressions." In 1904, a Coney Island elephant named Topsy was electrocuted after she lashed out at trainers, who had jabbed her with a pitchfork. Her electrocution was filmed by Thomas Edison's film company. In 1916, a docile elephant named Mary killed her violent trainer, after he prodded her with a bullhook, a barbed hook used to control elephants until very recently. People believed that "Murderous Mary" had planned to harm her trainer, and she was killed by hanging by a chain suspended from a crane in front of a crowd of 3,000 people.

While elephants are no longer considered citizens, we do know more about them. There is evidence that these majestic animals experience emotions, including jealousy and love. Researches concluded that a zoo elephant named Billy was suffering from grief, after losing his mate of 17 years, Becky. A "Free Billy" animal rights campaign, backed by celebrities such as Halle Berry and Lily Tomlin, raised enough money to relocate Billy to an elephant sanctuary. Many zoos are now shutting down their elephant exhibits. In fact, statistically, an elephant lives much longer in the wild (or even in a Burmese work camp) than it does in a traditional zoo or circus.

Elephants are now retiring from circus life, as we now view elephants as being capable of having human-like emotions instead of animals with a sole purpose of entertaining people. Ringling Brothers Circus held their final performances this past May, ending a 145-tradition of circus elephants shows. They are relocating elephants to their Center for Elephant Conservation, a site in Florida with over 40 Asian Elephants, the largest herd in North America, where former circus starts will spend their retirement.

Is it any wonder that Tillie was so loved in our neighborhood? In someway our community was ahead of its time. Tillie, and her pachyderm counterparts are remembered not as animals but as a contributing, loyal members of the community. How wonderful to think that these beloved animal companions lived out their years in our very own Terrace Park, perhaps the very earliest (and very informal) elephant sanctuary.