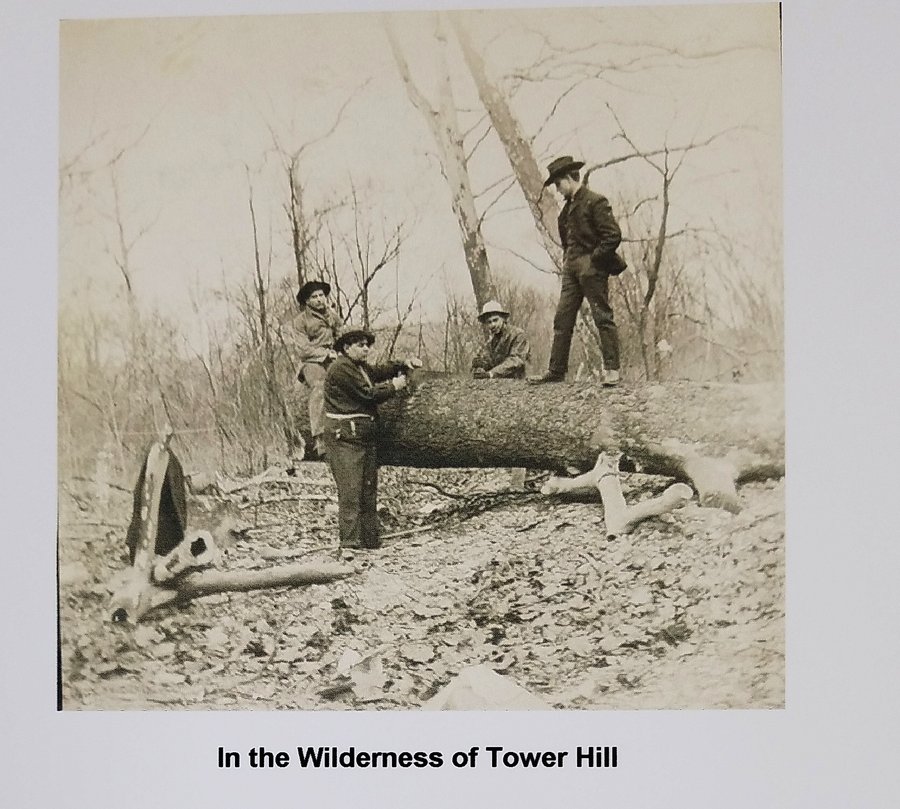 The following post is an excerpt from the book, "Down By the Old Millrace". (subtitle: "the early history of Plainville, Ohio and The Wooster Pike Area from it's beginning to Terrace Park, Ohio, 1794-1971"). It was written by Marie W Burke (Mrs Thomas J) in 1973. The post is found on pp 42-45, and the first quote about "What fun it is Marie..." was written by Erma Wright.

Summer Camps, Boat Clubs, Resorts on the Little Miami River from Terrace Park to Shademore in the Gay 1900's.

At the turn of the century, the shores of the Little Miami River were dotted with summer homes and cottages in this locale.

The George L. Wrights were among the first to appreciate the Tower Hill area during the summer months. Their daughter, Erma, has written the following description of happy summers spent near the location of the Upper Mill. It follows, "What fun it is, Marie, to reminisce with you about the gay times spent at Tower HIll during the gay 1900's.

The Pennsylvania Railroad, Wooster Pike, and the C.M.and L. Traction afforded splendid transportation to Hartman's Grove, a picnic spot adjacent to the Upper Mill on the Little Miami River.

The stretch of land east of Hartman's Grove attracted Amy Campbell of the Campbell Business School and a group of Harvard alumnae to build two two-story houses for vacation use. The Harvard men named their camp "Quenticol" and they drove out from the city in fringed surreys every Friday evening during the summer months for the weekend. Each surrey was drawn by two teams of fine horses. Theo horses were cared for by the Rimplers, who were in the dairy business. Their cattle barn was just across the road from the summer homes mentioned.

Later, several clubs - "The Willows", "The Hermitage", and "The Church of the Advent" (Episcopal) built cottages a mile or so above the bend of the river. A riffle separates the Tower Hill stretch from the "Stumps" - Judge Howard Ferris' home, and the Miami Boat Club stretch.

In the early 1900's, guests at the Harvard and Campbell houses were attracted to the beauty of the south bank of the river, the Newtown side, with it's ideal location for summer homes. The property was owned by Dr. I.D.Jones of Walnut Hills. He screened the families to whom he leased it. They were - the George Clephanes; William H. Settles; and George L. Wrights of Madisonville; and Frank Bahlmans of Walnut Hills. The lease specified "no liquor permitted on the grounds - penalty will be confiscation of house and lease terminated".

They all commuted to the city daily - when they came out from business in the evening, on hot summer days, they ran from the traction or train to the river bank and when the caretaker heard the familiar call, he responded with a boat and rowed them to the other side. Town clothes were shed, bathing suits were donned, and then a refreshing swim preceded a good supper, planned by Dr. and Mrs. Carl Wilzbach - who were then bride and groom.

Supper over, dressed in white sailor suites, the boys hopped into their "Old Town' canoes, filled with pretty felt pillows (made by their "best girls"), and paddled down to pick up the girls, who usually brought a banjo along. The group would wend their way up the river above the Y.M.C.A, then they settled among the pillows - holding on the the neighboring canoe, they would float down to the dam, en masse, for an evening of song and chatter. At 9:30 PM the "Pennsylvania" whistled for Harmans Grove crossing and every canoe was homeward bound, the campers to enjoy a cool, refreshing night's sleep in the country.

The George Wright cottage, "Linger Longer", boasted of a square rosewood piano and many evenings the group gathered for a song fest. These popular songs floated out over the Little Miami - "Sweet Adeline", "Down by the Old Mill Stream", "Carolina Moon", "Let Me Call You Sweetheart", and "Meet Me Tonight in Dreamland", etc. Hammocks, lawn swings and by 1910, electricity was introduced to the stretch.

Up to their arrival, there had not been a road leading into the grounds. A path in front of the cottages gave birth to a lane between the Clephane and Settle houses, making it possible to trudge through the wheat and corn fields to the AIchholz farm, on the Newtown side of the river. They shared milk and fresh vegetables with the campers. The haystacks were invaded on moonlit nights, much to the distress of the farmer, but the most beautiful "moon rises" were discernible from those stacks!

New campers arrived - houses were built east of the Y.M.C.A for the Cincinnati Union Bethel. Mr. Merrill Shutes and wife and Mr. White took care of the vacationers there. Dr. Harry Box had a cottage among the willows known as "River Bend Camp".

On the 4th of July, a "regatta" was held with swimming, paddling and boating races. The contestants represented most of the camps and prizes were offered. Robert and Howell Piper usually were victors of the double canoe races. In later years, representatives of the Cincinnati Y.M.C.A competed. Crows of campers and guests were enthusiastic onlookers and the city newspapers wrote up these events.

One "moonless" night was set for the water parade in August. There were flat boats, steel boats and canoes, decorated artistically with Japanese lanterns. Prizes were offered and such secrecy as to float, single canoe or boat design. Such a gala affair. The beauty of the occasion attracted people from Shademore, Plainville, Newtown and Milford. The city papers also covered this affair.

In the early days, the boys would plan an occasional dance at the "Old Upper Mill" at Hartman's Grove. They dressed in white suits and the Tower Hill Girls were invited, along with the "city pals" who were overnight guests of the camp girls. It was a memorable sight to see the canoes making their way down the millrace under the arched willow trees, all the young people looking forward to an evening of waltzes, two-steps, and Virginia reels in the dance hall which had been the Armstrong's lumber and grist mill, built around 1800. Lanterns provided dim light and a board fan, hanging from the rafters, swinging to and fro, reduced the heat. Oh! Such simple, carefree fun - something our young people of today will never enjoy.

But all was not easy in being a camper. The winter floods disturbed many a mind. While the houses were elevated, very often the water came into the lower floors and furniture had to be discarded and debris shoveled out via holes cut through the floors. The first pretty day found faithful campers eliminating the refuse and rescuing gasoline stoves and ice boxes. It was a tired group that left Tower Hill, looking forward to the next summer; The ever fascinating camp line and the lowing of cattle on the hill overlooking Wooster Pike, from the Rimpler and Iuen farms, will always be a treasured memory.

The writer, who enjoyed the gala affairs mentioned, also has pleasant memories of the Saturday night dances at the Y.M.C.A camp. They were chaperoned by Dr. and Mrs. Carl Wilzbach.

The Fred Wimplers were early settlers in the Tower HIll area. Fred built his house high on the hill overlooking the valley. The Herman Iuen family lived nearby; they were related and operated an extensive dairy business there for many years. The large cans of milk were hauled to the city daily in huge horse-drawn wooden wagons. Mr. Rimpler was jokingly accused of stopping at the Ferris watering trough on route to the city.

The John Stevensons built a home high on a hill too, overlooking the Tower Hill dam, in the early 1900's. Later, they added several small cottages for rental purposes on the land between Avoca Park (old Hartman's Grove) and the Campbell houses. Their house still stands atop the hill, watching over, as it were, the valley beneath it.

Other camps above Tower Hill will be remembered by many prominent Cincinnatians - the Little Miami River was a broad, clear, cool stream of water, inviting and enjoyed by many, one hundred years after the pioneers established their mills there.

The river flowed quietly on, and just south of Newtown Bridge was another summer colony - a playground at the location of the "Middle Mill" known as "Bass Island". Cincinnatians swarmed there during the summer months, by train, carriage and later the C.M. and L. Traction line. Picnic tables were available, swimming, boating and a pavilion was used for dances. An post from the newspaper of January 9, 1966 reads:

"The building was 65 years old. In years past it was the setting of many civic and social events. It was insured for $10,000.00. The State Fire Marshall's office is investigating the cause of the fire."

The Little Miami threaded its way on past Plainville, where the first pioneer settler landed in 1794 and where the first grist mill in that area was located. It meandered a short distance to the O.J.Ferris sandy beach. This was enjoyed by Cincinnatians who enjoyed summers in the cottages at "Crystal Fountain Springs" - truly a garden spot with its high spraying fountain and several interesting ponds.

Mr. Ferris located these cottages against the hillside, nestled among age-old trees. They were built in 1907 - four attractive summer cottages name "Poverty Row", "Double Decker", "Brook Haven" and "Plain Villa". A rustic pavilion was used for occasional dances and a well-maintained tennis court replaces what was in the 90's - a large watercress bed with grass-covered peninsulas for harvesting the cress.

Just across the river from the Ferris bathing beach was another summer colony - "Cottage Park". Many, many cottages there were occupied by CIncinnatians as well as one large family.

Another popular resort, and the last one on that stretch of the Little Miami, was known as "Shademore". It was organized by Charlie Moore in 1904, who will be remembered by many CIncinnatians who spent summer after summer at this playground. There was an attractive pavilion at the river's edge where dances were held on Saturday nights with a good orchestra.

The river was alive with bathers over weekends with countless canoes and rowboats. Regattas held on July 4 and Labor Day were the events of the summer. The men fold congregated at the landing after leaving the evening train from the city, and with one peal of the huge bell, the caretaker pushed the barge out and was on his way to bring the campers over for another pleasant evening in the country.

The campers at these resorts commuted by train or traction. That was before the days when every family owned several cars - hence the popularity of resorts that were within commuting distance of the city.

The campers who just enjoyed the weekends at Shademore congregated on Sunday evenings at a train shed which the railroad had provided, just below the O.J. Ferris property. They were joined by campers from the railroad side of the river. One of these camps will be remembered as the "Jolly Ten".

There was much vocalizing as the tired campers waited for the "Hog Train" (so named because coach after coach was filled with campers from Terrace Park on down. Many stood all the way into the city) - scheduled time 7:30 pm. They sang loud and strong and were accompanied by banjo and guitar players, and as the train pulled away from the train shed, the strains of Sweet Adeline floated away in the balmy evening breezes, and the happy campers were homeward bound, with pleasant memories of a wonderful weekend on the shores of the Little Miami.