An Insider's Guide to Terrace Park 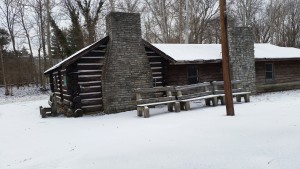 If you are new to Terrace Park, you may have heard mention of some mysterious places. Where exactly is the “Old Market”, “Covalt Station”, “Miami Grove” or the “Circus House”? And what about the Log Cabin, the Gazebo and the Wilderness Preserve?

Like knowing the secret password, in order to pass for a “native” you need some basic information.
Shhhhhh….. don’t tell anyone, but I will fill you in:

The “Old Market”, was an important center of activity in the village when stores were not as accessible as they are today. Many of our older residents have fond memories of buying candy there before it finally closed in the 1970’s. You would never guess that the present office building at the corner of Terrace Place and Harvard was once an the place to buy ingredients for supper.

Nor would you suspect that our elegant St. Thomas Church now occupies the site of where Abraham Covalt and a party of settlers built a log fort in the 1790’s - “Covalt Station”.

For many years, “Miami Grove” was a collection of dilapidated houses on the banks of the Little Miami River. After a devastating flood in the 1960’s the 50 acres of riverbank land became the property of Terrace Park. Thanks to the efforts of conservation-minded citizens in the 1970’s, the land was set aside to be protected as a “wilderness preserve”.

The “Circus House” was the home of the famous “John Robinson” of the Robinson Circus, which had its winter headquarters in Terrace Park. A window shaped like a “t” is a reminder of Robinson’s love for his star elephant, Tillie.

Perhaps you assumed that the Log Cabin was a relic of the pioneer days, but surprisingly, it only dates to 1936. The WPA built it out of local lumber and utility poles, and it has been the meeting place of the Terrace Park Boy Scouts ever since.

Finally, the gazebo that graces the Village Green and hosts Santa’s court at Christmas was built as a memorial project in honor of Terrace Park architect, Dick Ward. After he died at an early age, his friends incorporated one of his designs into what is now the central focus of our village activities.

Now you can almost pass for a Terrace Park native. But the true test is where you went to elementary school. If wasn’t our own Terrace Park Elementary, you aren’t the real thing. Unfortunately, there is no way to overcome this serious flaw in your upbringing, but at least there is hope for your children!(Reprinted with permission from the March 2015 issue of "A Walk in the Park" Magazine)