An Evening at the Birch 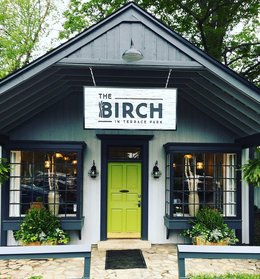 On Wednesday evening, June 14th, the Terrace Park Historical Society gathered at The Birch, the new restaurant in Terrace Park.

While sampling good food and drink, the members listened to an informative talk given by owner Brett Tritsch about the history of the property. Did you know that the original building was constructed in 1832 and was used as a school until 1873? In 1876, The Kuntz family bought it and converted it into their home.  They lived there until 1962.

Family lore says that when the school was being converted to a home, an unopened quart of Fleischman’s Gin was found hidden behind the stone stairs wrapped in a Cincinnati Enquirer newspaper dated 1865. The newspaper announced the surrender of Robert E. Lee to Ulysses S. Grant at the Appomattox Court House on April 9, 1865. That bottle has been passed from father to son. J. Lowell Kuntz Jr. who is now the current owner, showed the unopened bottle to the group.

After several life changes from a small motel to The Yankee Dollar clothing store, Bob and Mary Tritsch bought the building and the business in 1967. When they retired, they leased the space to two or three other enterprises. Today, Aaron and Brett Tritsch own the property and have converted the site into a beautiful restaurant and named it The Birch.