A Desk Full of Memories 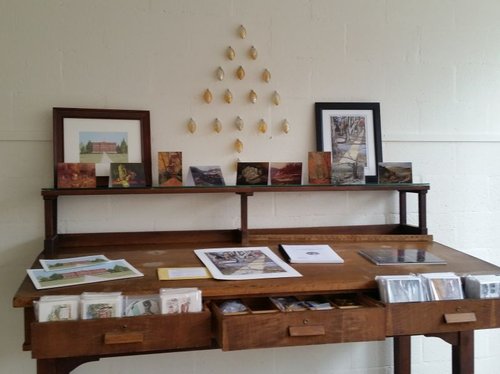 The adage “what’s old is new again” is especially apropos when applied to one of the Terrace Park Historical Society’s most recent acquisitions, a desk used for display and business transitions nearly 100 years ago.

Here’s the background: From 1914 until 1986, Denison Lane was known as Eveland lumber yard property, the site of Terrace Park Lumber Company and at various times the source of building materials, maintenance supplies, coal and heating oil for local homes and farms. In the early 1900s, customers would visit the one-story office building to peruse catalogs and place orders with proprietor George Eveland.

After World War I, customers were served by George’s sons Miles and Harry, and after World War II Harry’s sons George and Clarence, known by the nickname Red, oversaw operations. Transactions were conducted on an oak veneer desk – listed in furniture catalogs from the 1920s as a “stand-up accountant’s desk” - that stood 58 inches high and 6 feet long. Thick catalogs from Cincinnati area building supply distributors were kept on the top shelf and promotional flyers for smaller items like wire fencing and nails resided on the space below.

George’s son Tom – a member of the fourth generation of Evelands associated with the lumber company – acquired the desk after the property was sold in 1986 to Denison Development Company for construction of the houses that gave Terrace Park Denison Lane. About 20 years later Tom sold the desk for $100 to Terrace Park resident and land surveyor Lee Nordloh, who used it in Wooster Pike office.

When Lee retired and closed his office in early 2015, he fulfilled the contingency that came with the desk. “Tom sold it to me for just $100 providing I donated it to the Terrace Park Historical Society when I was finished with it,” Lee said. So it is that today the desk again commands attention as a focal point for the display of sale items. Its shelves and drawers offer Terrace Park Historical Society offerings – CDs, books, notecards, posters, limited edition prints and stationery.

But thanks to Lee Nordloh’s generosity and thoughtful respect for the past, visitors will also find the remnants of Terrace Park Lumber Company he found in the desk along with artifacts he and others have donated to the historical society. Of note:
BLOCK
A 1935 letter from The H. Belmer Company, manufacturer of wire goods, that encouraged the Evelands to stock-up on fencing, saying, “Due to (the) improved financial condition of the farmer, resulting from increased prices for farm products, we believe that this spring there will be considerable repair and replacement of fence lines;’ and

A 1912 price list for yellow pine lumber, flyers that offer galvanized steel coal buckets for $2.50 each, contractor’s wheelbarrows for $27.95, a dozen steel coal and coke forks for $36, puttyless utility windows and a variety of supplies used by local farmers; and

(From the February, 2016 Village Views, submitted by Sue Porter)